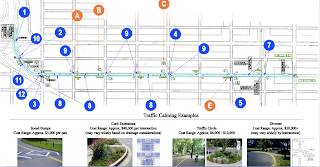 Minneapolis bikers all know that Bryant Avenue is one of the best north-south routes through the city and connects very well to Loring Park Greenway and the Midtown Greenway. It isn't really a big surprise that the city will make Bryant a bike blvd this summer. What is different is that Bryant is not a nice low traffic street for its entire length. Actually, Bryant from Lake Street south changes and see a higher volume of cars and a dedicated bus route. In a way the city is still doing what is right since this is a high use route for cyclists, but should we be calling it a bike blvd or is it a hybrid instead?
Bryant will not be your typical blvd that you would find on the Streets of Berkeley or Portland. Different segment o Bryant function quite differently for all users, but Minneapolis seems to understand that aspect and is planning things accordingly.
I am happy that the city is moving forward instead of choosing a less used route and making that the bike blvd, which tends to be a trend in most cities. I must give Minneapolis some credit for actually working with a route that has been established and through design making that work for all users. I am excited to see it and ride on Bryant when they are all done with the markings this summer.
Posted by mides@hunter.cuny.edu at 5:00 AM

Last summer I noticed a bike boulevard sign on Bryant, and I thought it was funny/sad that there didn't seem to be anything making it bike-friendly except the sign (at least on that block). Recently I've read from several sources that Minneapolis is going to make Bryant a bike boulevard this summer. Wasn't it already, at least in name? I've started to doubt my memory.