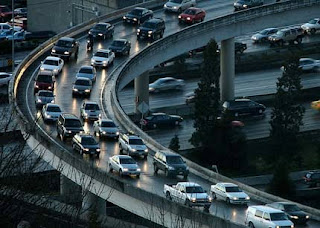 The past fifty or so years have proven that our freeways have not been kind to our major cities. They have been the reason for separated neighborhoods, loss of access to waterfronts, have eliminated entire communities, loss of time, environmental impact, and they have changed our travel patterns for the worse. Nathaniel Baum-Snow is a professor of economics at Brown University has put a real number to the loss. For every freeway the correlated loss is 18% drop in the cities population.
Baum-snow States:

There’s a lot of anecdotal evidence we see out there in metropolitan cities that a lot of jobs exist in the suburbs, and that that wasn’t nearly as true 40 or 50 years from now. But amazingly enough, there’s not a lot of systematic, empirical evidence about the extent of which that employment decentralization has occurred, and their isn’t a lot of empirical evidence about how commutes have changed over time. In the process of writing my first paper about highways and suburbanization, I tried to read everything I could about this and I couldn’t find anybody who’d looked at this in a systematic way across metropolitan areas.

And it turns out that not only has the nature of residential and employment locations have changed dramatically, but the nature of commuting patterns have also changed dramatically. Now, the vast majority of commutes do not involve the central city at all, even commutes made by people who live in metropolitan areas, whereas in 1960, the majority certainly involved central cities either as origins or destinations or both. And that’s a major change. I think the next step is to try to understand all the things that generated that change.

The question is not how to we return to the past, but create a more equitable future that takes advantage of our cities and our growing suburbs as supplemental to each other, rather than, in opposition to each other.
Posted by mides@hunter.cuny.edu at 5:00 AM