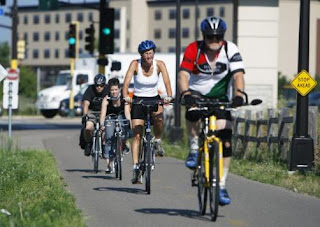 Forgive my boasting in this post, but it is great news that Minneapolis was chosen as the #1 bike city in the nation by Bicycling magazine. For those of us that live here and ride everyday we are happy to see our city get some recognition that it deserves.

Minneapolis has dethroned Portland, Ore., as the bike-friendliest city in the country.The new issue of Bicycling magazine, published Tuesday, ranks Minneapolis ahead of 49 other large- and medium-sized cities in accessibility to bicyclists.

Portland has long ranked first, both in the magazine's rankings and other surveys. In its assessment of Minneapolis, the magazine pointed to the fact that the city has nearly doubled its percentage of bike commuters in just three years and its pledge to install new bike racks and start an innovative bike-share program.

In Bicycling magazine’s May edition, which hits newsstands today, Minneapolis is noted for having a large and supportive biking community. The article also mentions the extensive infrastructure in place for cyclists here, including bike-pedestrian bridges, greenways and a bike-share program that will begin this year.

By choosing to bike instead of drive, residents help keep down traffic congestion, cut the production of greenhouse gases and reduce our dependence on oil. Plus, biking is a healthy way to get around. Minneapolis has the second highest percentage of bicycle commuters in the nation, according to a U.S. Census comparison of the nation’s 50 biggest cities. Find out more about bicycling in Minneapolis at www.ci.minneapolis.mn.us/bicycles. Other criteria include a city's number of bike lanes, municipal bike racks, bike boulevards, government interest in cycling improvements and local bike culture.

I moved to Minneapolis over a year ago and one reason was because of the current bike network. While Minneapolis still has a lot of work to be done, we have a good network that will only get better in years to come. R.T. Rybak, Minneapolis' Mayor, has stated he wants us to be a world class bike city, let's get to work Mr. Mayor.
Posted by mides@hunter.cuny.edu at 5:00 AM