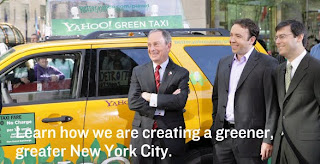 Tom Angotti, Urban Planner and Scholar, has this critique of the 2030 PLANYC. While some find Tom a bit rough around the edges (Yes, I was his student in Planning school) he does point out some of the legal and formal procedures that the city requires for adoption of plans. Angotti's critique is on firm ground and really does display the problem with planning in NYC, that it is all top down. Even the improvements to pedestrian and biking from NYCDOT have been a very top down approach. While many may be happy with the results, the process has been far from engaging and democratic. From the article:

Since PlaNYC was never officially approved, it remains an initiative of the mayor, owned and operated by City Hall. Generally, the Department of City Planning is responsible for planning and engaging other branches of government.

The department, however, played a minor role in preparing the 2030 plan, and long-term plans of any kind have been notably absent from City Planning’s portfolio. Instead, the agency touts as one of its top achievements the 100 rezonings it approved in the last eight years.

While the rezonings have opened up opportunities for new development -- also a major goal of PlaNYC2030 -- and protected many other areas, they hardly pass muster as "plans." Rezoning for new development is often done without planning for new schools, transit and other services, nor does it entail measures to deal with existing service deficits or the myriad problems that face communities. In some neighborhoods that have undergone massive rezoning, such as Williamsburg, residents are now up in arms because new high-rise luxury development has overtaxed the capacity of local schools and transit.

The other side of the arguement is - would PLANYC ever exist if it needed to go through the normal channels? This begs the question really - can you plan for a population of 8 million?
Posted by mides@hunter.cuny.edu at 5:00 AM