Streetcars coming back to Minneapolis 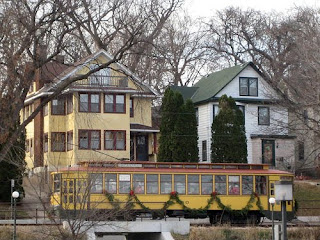 Things have been looking up in the City of Lakes. We are going to get our 2nd LRT line up and running by 2014, our first commuter heavy real line is up and running, and now the City Council is starting to look seriously at a few feasible Streetcar lines. Anybody who understands circulation patterns must realize that the Nicollet Mall/Avenue and Greenway lines would be providing services along dense corridors with thriving commercial corridors.

Not to forget, that the Greenway Street car line would link two LRT lines, spur development connections along the greenway, and provide a much better transit option for those traveling east and west. It would also be able to create a better transit hub at the global market. I am glad to see these transportation ideas being considered because we really do need to make better connections in Minneapolis and this infrastructure, which will be costly, will pay back the city and residents for years to come. City pages had this article.

The next step is for the city and its partner agencies to narrow down these six lines to two or three lines for further study, and to then proceed with a first funding application to the federal government for one line.The Council's vote followed a change in the way the Department of Transportation approves federal dollars for transportation studies. Under the Bush administration, the approval process favored studies that proposed moving passengers from city centers out to suburbs.

Under the Obama administration, the department accords new weight to plans that seek to enhance urban livability and economic growth."When Minneapolis started planning for streetcars a couple years ago, some people said we were moving too fast, because we didn't have a federal partner who was willing to help us," Mayor R.T. Rybak said in praise of the Council vote. "Last Friday, the Council took a big step forward toward make sure we put modern streetcars where they belong -- along the commercial corridors in Minneapolis that used to have them."

While these will take more study and years to build, we are taking another step towards a more livable and healthier city.