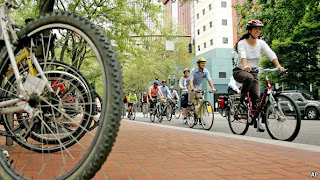 This article in The Economist about Portland as an elite city caught my eye the other day. The premise is that as your city becomes more livable, sustainable, and healthier - well so does the cost of living which eventually wipes out the middle class. While that might be true for Portland, I am not sure I buy the argument, I do believe this trend has killed the core for cities like New York and San Francisco. Where only the wealthy, and those who work for them, can manage to live, or so it seems of late.
From the article:

Joel Kotkin, a Los Angeles-based demographer and author, thinks that places like Portland, San Francisco and Boston have become “elite cities”, attractive to the young and single, especially those with trust funds, but beyond the reach of middle-class families who want a house with a lawn. Indeed Portland, for all its history of Western grit, is remarkably white, young and childless. Most Americans will therefore continue to migrate to the more affordable “cities of aspiration” such as Houston, Atlanta or Phoenix, thinks Mr Kotkin. As they do so, they may turn decentralised sprawl into quilts of energetic suburbs with a community feeling.

That is not to belittle Portland’s vision. It is a sophisticated and forward-looking place. Which other city can boast that its main attraction is a bustling independent book store (Powell’s) and that medical students can go from one part of their campus to another by gondola, taking their bikes with them? Other cities will see much to emulate. Minneapolis, for example, this month displaced Portland as Bicycling magazine’s most bike-friendly city (“they got extra points for biking in the snow,” grumble Mr Adams’s staff). Adam Davis of Davis, Hibbitts & Midghall, a Portland polling firm, says that Oregonians like to consider themselves leaders but also exceptions. They are likely to remain both.

Then the question becomes do you want to live an elite city or an aspiring city? For me (living in the Twin Cities) I have chosen the aspiring city.
Posted by mides@hunter.cuny.edu at 5:00 AM