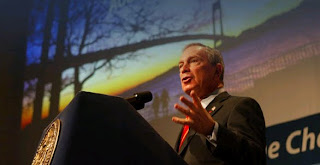 Planner and scholar Tom Angotti wants more local and community input to PlaNYC, Martin J. Chavez thinks Mayor Bloomberg did an excellent job and created a model worth replicating in other cities:

This process required a new level of coordination between City departments that didn’t previously exist. All too often in municipalities, as in any organization, projects and programs are siloed within departments that don’t communicate. To resolve this, the Mayor created the Mayor’s Office of Long-Term Planning and Sustainability, a central office to drive the creation of PlaNYC and manage collaboration between departments. Cooperation wasn’t optional, since Mayor Bloomberg made clear his personal commitment to the plan.

But Mayor Bloomberg took care not to over-manage the process from the top down. Instead, he hired the most talented staff he could find and encouraged a culture of innovation, empowering city staff to experiment with new ideas—and giving them permission to be bold and take risks. This is a major distinction to the business-as-usual approach so common in jurisdictions around the country.

The good news is that a culture of innovation isn’t unique to New York, and is taking root in cities from Cleveland and Chicago to Las Vegas and my own Albuquerque. We’re all sharing and implementing the best ideas wherever we can find them. The imperative is to deal with issues like climate change and energy independence now, and make our communities even better places to live for our children and grandchildren.

Both Chavez and Angotti have a point, but who is right? Having worked in NYC on many levels and dealing with numerous city bureaucracies I would say they both have a point. We need city departments to function better together and not different silos, but at the same time, we do need better engagement of our communities in regards to creating and sustaining more livable cities. I do firmly believe we need innovation, but in a comprehensive manner that incorporates everyone. City staff can sometimes be the most disengaged folks to work with which causes good ideas to go unimplemented.
Posted by mides@hunter.cuny.edu at 5:00 AM