A race to the bottom 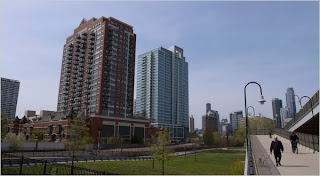 Their have been plenty of residual problems because of the housing bubble and it's bust. When housing becomes just another commodity, construction standards lack to improve the developer's bottom line. The South Loop of Chicago know this all to well since many of the new condos that were built their are now in need of major repairs.
From NY Times article:

The view from Tom and Jane Justic’s eighth-floor condominium in the South Loop — with Soldier Field in the foreground and majestic Lake Michigan behind it — is exactly what they were looking for when they moved from Beverly in 2005.
But the condominium that came with that view has an unexpected and unwelcome additional cost: $850 a month in special assessments for the next five years, to cover the expense of building repairs that were completed late last year.
Since it was constructed in 2002, the Justics’ 23-story building at 1717 South Prairie Avenue has become an extreme example of the strains and pains that many South Loop condominiums and town houses now face from the area’s boom in construction before the market collapsed in late 2008. Once one of the city’s hottest real estate markets, the South Loop is crisscrossed by scaffolding and suffused with the frustration and anxiety of litigation between condo boards and developers.

Just another after effect of the housing boom rears its ugly head. Just how many more problems are still expected as a result of our race to the bottom?
Posted by mides@hunter.cuny.edu at 5:00 AM