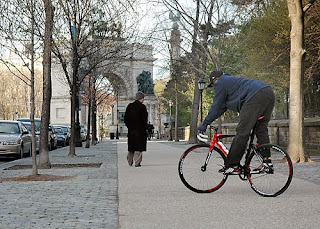 I commuted through Prospect Park in Brooklyn for 6 straight years. Other than getting the cars out of the Park, my other frustration was Grand Army Plaza and Prospect Park West. So much so that I entered a design competition that would redesign the GAP and made Prospect Park West a two way Street. When the final results came out it was quite the disappointment since few of the proposals actually dealt with the traffic, bike, and pedestrian issues.

Years later it looks like we might finally have a victory. NYCDOT is now proposing taking one lane of Prospect Park West and creating a two-way bike lane. This would be a huge improvement for everyone who lives by and uses Prospect Park. Of course, the knee jerk reaction has slowed the process and made DOT cut back a bit, and Marty (the Borough President) is a loud opponent. I am excited that this project will still move forward and Prospect Park is taking another step closer to be a more friendlier and easily accessible place for everyone. Here is the Streetfilms: