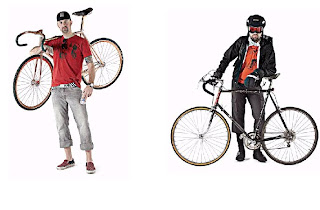 I always ponder why we feel the need to put everything into its nice little box. Again cyclists are the chosen as the stereotypes that need to be labeled to make sure the cyclist is always seen as different. When is the last time you heard a pedestrian or car driven given the archetype of Roadie - hipster - art school girl? Not very often I believe. It seems pedestrians are plagued with two labels. Those who walk (aka pedestrians) and those who don't (aka non-pedestrians). The same is true for people who drive cars. Those who drive (aka drivers) and those that don't (usually referred to as passenger). Yet, in the biking world (remember bike culture is not for sale) we can't just be a cyclist that is simply going from point A to B.

This “it” in question is a paradigm shift of how area residents view the humble act of bicycling. Today, we embrace biking as more than just exercise, transportation or fun (although, at its core, it’s mostly about having fun). In the Twin Cities, cycling has become a lifestyle. Minneapolis, especially, has seen its renowned biking infrastructure—much of which was built or expanded in the 1990s—spawn a passionate biking culture. Travel + Leisure Magazine recently hailed Minneapolis a “paradise for pedalers,” counting it among Paris, Portland, Amsterdam and others
as a scion of global biking culture.

The simple thing that metro magazine is missing, the point really, is that I would argue most cyclists are all the things they described built into one. A lot cyclist ride their bike for different reasons, and even have different bikes for those reasons (just like the various reasons people drive, walk, and use public transit). For instance, my daily commuter would not suffice for a long 50 mile ride on the weekend. If I am just running short errands that require more speed the track bike (aka hipster fixie) is usually the bike of choice. What is actually so great about biking, and especially in the Twin Cities, is that we are all these things rolled into one. Roadies, hipsters, commuters, and art school students UNITE.
Posted by mides@hunter.cuny.edu at 5:00 AM

Hope your track bike is a single gear with brakes.

I'll respectfully disagree.
I hear people stereotyping drivers all the time, and I'm afraid I tend to myself. The guy in the pickup is a "redneck" the guy in the Beamer is a "a$$hole banker"
The woman in the subaru with the phish bumper stickers is a hippy chick who killed off a few too many brain cells.
I agree with your underlying premise that stereotypes are often unhelpful and allow people to separate "Us" from "them" and that this is dangerous when that separation causes people to treat other people unsafely.

Cycler - well, yes, both pedestrians and drivers get sterotyped, but I think the thrust of the article is that there isn't a socially-imposed infrastructure of perception that makes the general public able to look at a line of people and pick out those who walkers and drivers. They think the hip kid or the insanely fit dude is the cyclist.

At least that's my take on it.

I think "bike culture" can actualy be a disincentive for people to get into riding their bikes. If you don't have the right clothes or the right bike, it can make people feel uncomfortable or apologetic for not making the right presentation. One of the things I like about getting older is that I find I care a lot less about what other people think, which is very liberating when it comes to fitting myself into a sterrotype box.