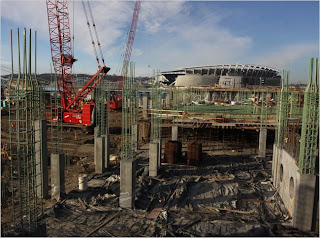 This seems like a lesson that every city needs to learn for itself, stop funding private (sport stadiums) with public money. There seems to be a notion that a stadium is for the good of all and will spur economic development around the surrounding areas. This might be true some times, for the most part stadiums drain the city coffers and produce little economic development. The Metro dome in Minneapolis is a great example. It is an island on the eastern edge of downtown. What economic development has it created? A sea of surface parking lots for game days, that is about it.

The NY Times has this great article that talks about how cities are cutting basic programs and services it provides to it citizens to fill budget gaps for stadiums:

From New Jersey to Ohio to Arizona, the stadiums were sold as a key to redevelopment and as the only way to retain sports franchises. But the deals that were used to persuade taxpayers to finance their construction have in many cases backfired, the result of overly optimistic revenue assumptions and the recession.

Nowhere is the problem more acute than in Cincinnati. In 1996, voters in Hamilton County approved an increase of half of one percent in the sales tax that promised to build and maintain stadiums for the Bengals and the Reds, pay Cincinnati’s public schools and give homeowners an annual property tax rebate. The stadiums were supposed to spur development of the city’s dilapidated riverfront.

But sales tax receipts have fallen so fast in the last year that the county is now scrambling to bridge a $14 million deficit in its sales tax fund. The public schools, which deferred taking their share for years, want their money.

Is this really good business and management? We need leaders that can deal with sports teams, but also make the tough decisions that if they don't get a new stadium they might pick up and leave. In the future that might just be a chance that some cities might need to take to make sure that can maintain the current standard of services. As much as people like to take in a game locally, my day to day quality of life issue are a bigger priority for me.
Posted by mides@hunter.cuny.edu at 5:00 AM