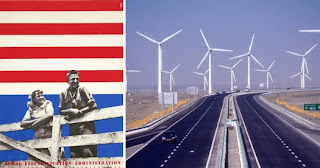 It seems that we are letting a great opportunity slip on by. With the foreclosure crisis, bank bail outs, and knowing the current climate change issues, we have taken to sitting on our couches and watching it as it all unfolds. While I don't want to put blame on the new administration, it seems that many of the ideas and concepts talked about on the campaign trail was just that, on the campaign trail.

I believe right now is the opportunity to engage the American public on ways that we can fundamentally start changing our lives and the way we live them. While we are stuck in this void, we haven't even been able to vision what the future could and should look like. It seems once again we are doomed to inaction, which will result it little fundamental changes to our lifestyles.

Nancy Levinson has this great article that goes in depth about how we can make those changes and that this administration can create a better future for all:

Yes indeed, today in America we know that something is wrong, and we would like things to be better. Certainly the design disciplines have been energetic in engaging the converging crises of energy, housing, infrastructure, environment, climate change. In his recent essay on Urban Omnibus, Vishaan Chakrabarti, director of the Real Estate Development Program at Columbia, argues passionately for legislation that would produce "a country of cities." Chakrabarti expresses his frustration — shared by many in the design community — that Obama and his advisors have failed to grapple with the root causes of the crises, which is the American way of life, "our profligate consumption," the big house and the wide highway and the exurban spread. And he imagines what might have been a "very different first year for the administration," with the creation of a big new program, the "American Smart Infrastructure Act," or ASIA. "After the $700 billion TARP bailout, in which banks were said to be too big to fail," he writes, "we could have been told that the nation and world were, in fact, too big to fail." Chakrabarti describes his ASIA:

"We will build and rebuild infrastructure that lowers greenhouse gas emissions and encourages urban density, emphasizing high-speed rail, transmission grids from alternative energy sources, national internet broadband, and critical roadway maintenance. We will deemphasize all infrastructure that exacerbates emissions, particularly roadway and airport expansion projects. The government will fund approximately $350 billion (about half of TARP) over three years, solving the nation’s mobility needs while lowering automobile use and censuring the energy devoured by McMansions."

Yes, I agree that the general public knows something is wrong, the real question seems to be, what are we going to do about it?
Posted by mides@hunter.cuny.edu at 5:00 AM