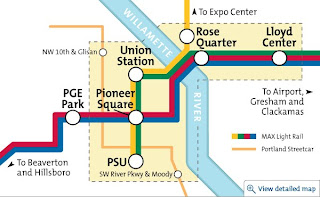 One of the things I loved about downtown Portland was fareless square. This is a geographic area within the downtown that buses, street cars, and LRT were free. I can't think of many better ways to get people on public transit in downtown other than making it free. The times I have visited I was always a happy tourist because of fareless square. I even think about the positive impact a fareless Nicollet Mall or downtown LRT line would have on Minneapolis.

I was dissapointed to see this story talking about the confusion it caused so that TriMet has elimated the fairless square on its buses.

Starting Sunday, you won't be able to ride buses for free anymore in downtown Portland. After more than three decades, TriMet voted earlier this year to eliminate free bus service in Fareless Square, which covers downtown, Old Town, the convention center and Lloyd Center. The area, where MAX light rail and the streetcar will still be free, will be called the Free Rail Zone. The square was created in 1975 to reduce emissions and auto traffic in the downtown area.

Though it has attracted transit users, the square has been faulted for encouraging crime and annoyances on buses and trains. It also made it difficult to collect fares from bus riders who may board in Fareless Square but continue on beyond the zone.

This is a huge loss to one of the most progressive transportation planning cities in North America. I am sure some education and a campaign could have fixed the confusion (if it actually existed).
Posted by mides@hunter.cuny.edu at 5:00 AM

The fareless square ended because of funding problems, not because of confusion. Trimet is saving about a million bucks a year by now charging people to ride the buses through the downtown. The trains and the streetcar are still free in the downtown area, though.