The Anatomy of Ruins 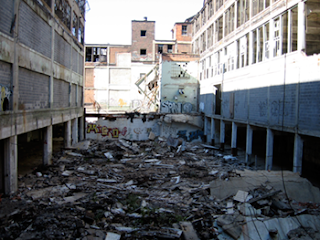 Check out this interesting slide show and article over at Canopy.

Detroit and New Orleans are separated by roughly one thousand miles, yet in many ways they occupy the same space. The collapse of Detroit has exposed the boom-bust breakdown of the innumerable American cities on the front lines of racial segregation and mass deindustrialization. Meanwhile, Hurricane Katrina turned New Orleans into the poster child for the toxic relationship between crisis and capitalism. First the city was at the mercy of private military contractors and the government’s inept emergency-response apparatus, then the predacious agents of redevelopment. Both places are rife with scenes of urban desolation: foreclosed homes, abandoned blocks, shuttered factories, graffiti-bombed schools, fenced-off warehouses, deserted infrastructure; haunted spaces that blur the remains of natural and economic catastrophe.