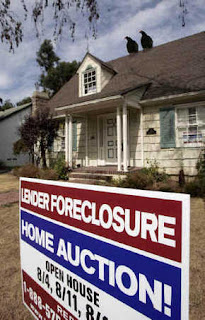 This article in the NY Times demonstrates how the attempts by the federal government have had little impact on the stemming the foreclosure crisis. While bank bail outs and clash for clunkers seemed to be a hit, the federal plan for banks to work with homeowners to reduce monthly payments hadn't really worked.

It is increasingly clear that the Obama administration’s anti-foreclosure effort — which pressed lenders to reduce interest rates — isn’t doing nearly enough. High unemployment rates also mean that many borrowers who did qualify for aid have been unable to keep up with even reduced monthly payments.

As a result, an estimated 2.4 million foreclosed homes will be added to the existing glut in 2010, driving prices down by another 10 percent or so. That would bring the average decline nationwide to about 40 percent since the peak of the market in 2006.

A renewed price drop could usher in a new grim chapter in the foreclosure crisis. Already an estimated one-third of homeowners with a mortgage — nearly 16 million people — owe more than their homes are worth; in industry parlance, they are “underwater.” If prices drop further, ever more borrowers will sink ever deeper. Research suggests that the greater the loss of home equity, the greater the likelihood that borrowers will decide to turn in the keys and find a cheaper place to rent.

Things didn’t have to get this bad.

The feeling I get doing community development work and seeing the foreclosure crisis first hand in St. Paul is that the feds are not giving this the top priority that it needs. While NSP dollars are coming to the city to buy vacant and foreclosed homes, not much seems to be on the horizon to prevent the foreclosure in the first place. Federal program or not, it will be years before these neighborhoods see any sort of recovery in regards to the housing market and foreclosures.
Posted by mides@hunter.cuny.edu at 5:00 AM