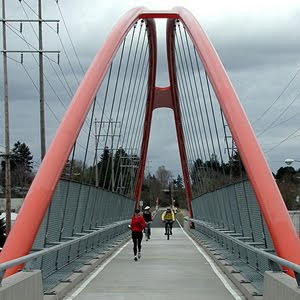 As usual the only US City to make the list is PDX. Askmen.com did a great job of profiling the ten cities. Here is what they say in regards to our progress:

The United States has a love affair with the car. At least until recently, the internal combustion engine has dominated what it means to commute. The car remains more than a mere form of transportation, it's a status symbol -- but that symbol is a dinosaur.With the cost of fuel skyrocketing and environmental conservation having become fashionable, a well-known 120-year-old invention is making a comeback.

The bike in its well-worn simplicity is quickly becoming a major part of urban community transportation plans.Bicycles have numerous benefits, but it takes a serious commitment to city planning to make those benefits practical. Cities like Paris, while trying to be bicycle-friendly with programs like Velib', remain too large and frenetic to be considered truly bicycle-friendly.While it seems like America is just taking heed of this recent resurgence in bicycle culture, other urban areas the world over have long been ridiculously bicycle-friendly cities through their urban planning.

We need to wake up and smell the Phil Wood grease.
Posted by mides@hunter.cuny.edu at 5:00 AM