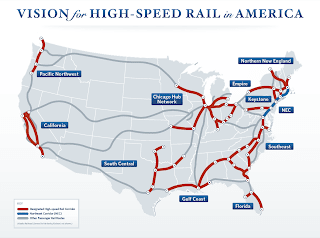 I must admit that I have mixed feelings about this. Would I love to see a high speed rail from the Twin Cities to Chicago, of course I would. Now living in the Twin Cities and growing up in Chicago this would be a great way to travel between the two (rather than driving, busing, or flying). Is this really the best use of federal and state funds in a metro area that is lacking in a good comprehensive public transportation system?
From the Star Trib:

The plan was ordered last year by the state Legislature, well before a scramble erupted in many states to push their own high-speed rail plans. That was triggered by the infusion of $8 billion in federal stimulus money specifically earmarked for such rail lines nationwide.

Gov. Tim Pawlenty, previously not a big advocate of high- speed rail, endorsed the Twin Cities-Chicago route last spring. The plan recommends that both St. Paul and Minneapolis would have stops on the line.

While this would be a great long term investment in transportation for the upper Midwest, I am not sure it is still the most relevant transportation project. I think the Twin City region really needs to worry and work on building a network that connects our current region that connects to local cities and destinations. Are people going to be commuting everyday to Chicago from the Twin Cities via high speed rail? I doubt it.
Posted by mides@hunter.cuny.edu at 5:00 AM

1) I LOVE this blog. :-)
2) I disagree with this post. The point of high speed rail (HSR) is to alleviate regional airport and highway congestion. I believe (?) MSP's newest expansion will only get us 15 to 20 years out before we need an airport, and when O'Hare so much as sneezes, the rest of the US aviation system catches a cold.
3) High speed rail is also much greener over car and air travel.
4) It will be more economical as fuel costs rise.
5) Less hassle with airport security.
6) 9/11/2001 crippled our country's transportation system for 3 days. The large-scale financial repercussions in the airline industry are still playing out.
My argument for HSR: We can't put all of our regional transportation eggs in one basket.

And thanks! Keep blogging! :)