To build a bridge or light rail? 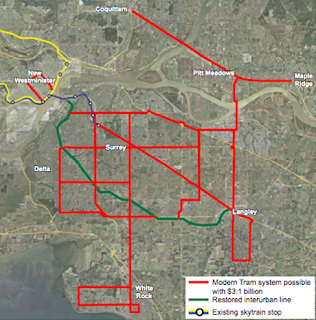 I know most of you are thinking why the silly question. As it turns out British Columbia is faced with this question. This Tyee article lays out what has happened as plans for a public-private partnership for a new bridge is no longer feasible because of financing. Instead, UBC Design Centre for Sustainability has the bright idea to take the 3.1 billion and see what else was feasible:

What other transportation infrastructure, they asked, could we instead have for $3.1 billion?

By the time Prof. Patrick Condon and researcher Kari Dow at the UBC Design Centre for Sustainability finished punching in the numbers and mapped their results, they produced a startling alternative vision. For the same money, concluded the team, the government could finance a 200-kilometre light rail network that would place a modern, European-style tram within a 10-minute walk for 80 per cent of all residents in Surrey, White Rock, Langley and the Scott Road district of Delta, while providing a rail connection from Surrey to the new Evergreen line and connecting Pitt Meadows and Maple Ridge into the regional rail system.

They point out that while building a bigger Port Mann Bridge reinforced commuting patterns in the region, building a robust light rail network likely would change how development occurs in the region, eventually shortening commutes as businesses elect to locate at various new public transit nodes.

"The Port Mann project is propelled forward by assumptions that are 20 years out of date. Commuting patterns are changing rapidly. The commute from Surrey to downtown Vancouver is relatively rare and getting even rarer each day. Jobs continue to move closer to housing all across the eastern part of the metropolis. What is needed is a system that gets us out of the car and serves our emerging complete communities, not guts them," said Condon.

Here is a great example of how we need to change the way we think about projects. Instead of looking at the cost effectiveness of a project, maybe the alternatives should be a more real and viable option. Not based on supply and demand (in regards to automobile patterns), but rather looking at changing commuting patterns through a multi-modal approach to large capital projects.
Posted by mides@hunter.cuny.edu at 6:00 AM