A lot of talk and attention has been given to various transit projects in the Twin Cities region. Some have been on the drawing board since the 1980's. This MN Daily article gives a break down of the top five that actually have a really good chance of being built. The Central Corridor and North Star are done deals, while the other three are gaining serious traction. 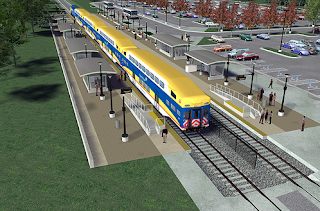 The Northstar Commuter Rail line began as an 82-mile passenger train running between Minneapolis and the St. Cloud area, but in 2004, in order to get half of the project funded by the federal government, the line was shortened to run between Big Lake and Minneapolis. The line is planned to be up and running by the end of this year and will eventually connect to the up-and-running Metro Transit Hiawatha Line. Plans are in the works to eventually reach the original goal of extending the line out to St. Cloud.

STOPS: Elk River, Anoka, Coon Rapids and Fridley between Big Lake and Minneapolis.
COST TO BUILD: $320 million
TRAVEL TIME/DISTANCE: The train will travel 40 miles between the Minneapolis and Big Lake at 79 mph in about 45 minutes. 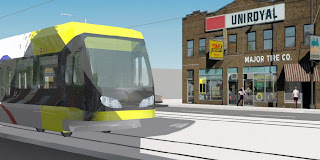 The Central Corridor light-rail line, which will connect downtown St. Paul and Minneapolis via University and Washington avenues, has consistently run into snags along its way to completion.
The line has had the initial construction date pushed back from summer 2009 to late summer 2010 after Minnesota Public Radio raised concerns about noise vibrations from the line. The line could be up and running by 2014 if all goes according to plan, eventually connecting with the Hiawatha Line.

STOPS: The Central Corridor line will stop in more than 15 locations between St. Paul and Minneapolis before it connects to the Hiawatha Line, including the University of Minnesota East and West Banks, Stadium Village and the state Capitol.
COST TO BUILD: It will cost an estimated $915 million, half of which could be funded by the federal government.
TRAVEL TIME/DISTANCE: It will take 40 minutes to travel down the 11-mile line between downtown Minneapolis and St. Paul. 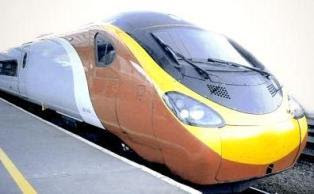 The Northern Lights Express, an inter-city passenger train line that would connect Duluth to Minneapolis, has been getting a lot of attention recently. The reason for the added attention is because of a federal grant totaling $1.1 million from the Federal Transit Administration that set the project into a preliminary environmental study phase. In December 2007, The National Passenger Rail Study Group identified this line as one of eight top priorities for development in the country, and the Minneapolis/Duluth Superior Passenger Rail Alliance hopes to begin the engineering work on the line next year. If all goes as planned, it could be running in 2012.

STOPS: Currently, the only planned stops are Minneapolis and Duluth.
COST TO BUILD: $560 million
TRAVEL TIME/DISTANCE: The line would travel 155 miles at about 110 mph, making the trip within two hours. 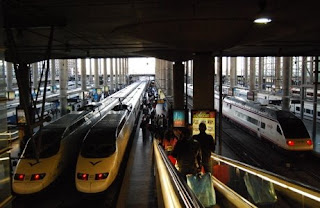 A high-speed rail line from Chicago to St. Paul has long been under discussion, but the recent surge of federal stimulus funding has brought the project to the forefront for many Midwest rail authorities.With the stimulus money favoring projects that are ready to go, Ramsey County officials are pushing a proposal to get the high-speed line up and running.

STOPS: It’s too early to know exactly where the train will stop, but there have been discussions on connecting the line to Milwaukee and Green Bay. Officials from Rochester have also asked for a stop in the area. The recent call for consideration came from Hennepin County, who would like to see the line stop in Minneapolis.
COST TO BUILD: The most current cost estimate of the St. Paul-Chicago line is $1.2 billion.
TRAVEL TIME/DISTANCE: The train is expected travel up to 110 mph, reducing the trip from about seven hours by car to about five hours. 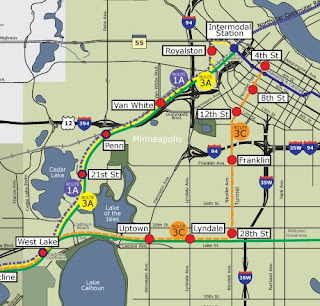 Although the Southwest Transitway is not the most talked about line proposed in the Twin Cities area, it has been on the table for discussion since 1980, when the Metropolitan Council first did a feasibility study of light-rail projects in the metro area. Since then, three possible routes for the line that will connect Eden Prairie to Minneapolis have been proposed and are undergoing an environmental impact study. After the environmental impact statement is complete, initial engineering could occur within two years, with final design and construction starting by 2013. The line is projected to open between 2015 and 2017, Katie Walker, Southwest light-rail project manager with Hennepin County, said.

STOPS: The specific route for the line has not been finalized yet, but the line would serve Minnetonka, Edina, Hopkins and St. Louis Park.
COST TO BUILD: $865 million - $1.4 billion.
TRAVEL TIME/DISTANCE: The train will travel 14 miles between 30 and 50 mph, and is estimated to take about 35 minutes.

Thanks for blogging this! It's great to see it all spelled out in one short, easy to read version.

While I'm overjoyed that Mpls is working on creating new, more effective transit options, I hope they start to approach the problems that already exist. At www.cedaraveunited.org We've been trying (without much luck) to convince the city/county to approach existing issues with our S. Mpls monster street; making it safe and upgrading to a more 'complete street'. Oi.

That being said, it will be great to take the light rail all the way to work in St. Paul!

I enjoy your blog! thanks