A new bus shelter for a bus not coming 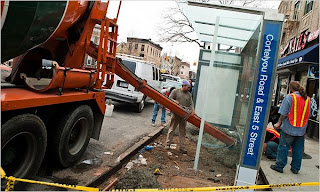 Cities and transportation are so ironic these days. This NY Times story about the B23 bus in Brooklyn was a telling tale of red tape and waste. Before I relocated to the Twin Cities I use to live along this line. Since I really never waited for the bus I would usually make the 15 block trek to the Ditmas F stop. In traditional fashion, new bus shelters are replacing old ones on a line that is on the cutting block.

Antonio M. Rosario, a photographer who lives on Ocean Parkway, noticed earlier in the week that the old shelters had been dismantled. “I figured they were just beginning to prepare for the service shutdown,” he said on Friday.

Then, on Friday, he saw that a brand-new bus shelter had gone up at Cortelyou Road and Ocean Parkway. “This makes no sense,” he said as he watched the crew pouring concrete around the base of the new shelter.

The prospect of losing the B23 bus is upsetting, he said. “I just moved to Ocean Parkway in Brooklyn with my wife last September from Park Slope,” he said. The B23 “made the move more tolerable,” he said, and they take it often — and often in opposite directions.

And he often goes out heavily loaded, carrying 30 to 40 pounds of equipment: cameras, lenses and other gear for his freelance photo shoots.

One of the workers installing the new shelter, Robert Irizarry, said he had heard about the plan to get rid of six bus lines in Brooklyn, “but I didn’t know this was one of them.”

We can at least hope the line will be restored and all this work won't be for nothing.
Posted by mides@hunter.cuny.edu at 6:00 AM