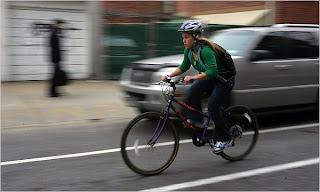 How quickly can your quality of life take a 180 degree turn: job loss. You are now without income, retirement plan, and health insurance. What could be worse, that in the high cost of NYC, your weekly unemployment checks will barely cover rent and cobra. Anybody who has been given the pint slip (I have been there myself) in NYC will find, that unemployment benefits (assuming you were making enough to begin with) won't cover many of the basic needs (food, shelter, and clothing). This NY Times article gives a few examples of how residents finding themselves with more free time these days are coping with a public benefit that hasn't been increase to match the cost of living.

Lose your job in Boston, Pittsburgh, Seattle or Trenton and you could collect $544 or more per week in unemployment benefits. But get laid off in New York City, as almost 200,000 workers have in the past year, and the most you can collect is $430 a week.

When Ms. Moran was dismissed in March from her position handling internal communications for a publishing company, she had a sense of déjà vu about her unemployment pay.

Ms. Weissman, 27, said there had been “a steady three years where I really didn’t have to worry about where my next paycheck was coming from.” When she was told of her dismissal, she was shocked to learn how little she would receive from the state.

Michael Sklar, 51, said he had resorted to asking his parents for financial help after several months of trying to support his family of three on the unemployment pay he collects from New York State. The federal unemployment insurance system was designed to temporarily replace about half of a laid-off worker’s lost income, but Mr. Sklar’s benefits amount to just one-fifth of what he said he had earned as a senior systems analyst for Sony Music Entertainment in Manhattan before he was dismissed in late August.

Making ends meet will be difficult and if things stay this way a new Exodus will happen in NYC, the young leaving in droves.
Posted by mides@hunter.cuny.edu at 6:00 AM