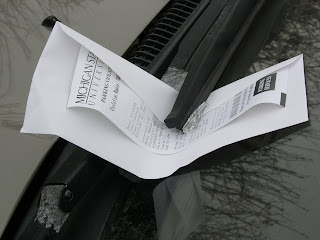 What do our taxes pay for these days? We honestly don't know anymore. As the economy has taken a dive, residents are now faces with new fees (in some cases enforced fees) for things that most would consider a function of the local government. Many of these things are quality of life issues to many communities. This NY Times article discusses a few.

If you date the start of the downturn to last September, the ticket-writing is just getting under way. And New Yorkers can expect more days like the one in mid-March, when the police wrote 9,016 driving-while-phoning tickets within 24 hours, roughly 20times the usual number.

Wisconsin’s governor, James E. Doyle, has proposed a charge on slaughterhouses that would be levied on the basis of each animal slaughtered. He also wants to more than triple the application charge for an elk-hunting license to $10, an idea that has raised eyebrows because the elk population in the state is currently too small to allow an actual hunting season.

Washington’s mayor, Adrian M. Fenty, has proposed a “streetlight user fee” of $4.25 a month, to be added to electric bills, that would cover the cost of operating and maintaining the city’s streetlights. New York City recently expanded its anti-idling law to include anyone parked near a school who leaves the engine running for more than a minute. Doing that will cost you $100.

In Anchorage we had the opposite problem. Common city amenities, such as curbside recycling, trash collection and adequate snow removal was NOT provided by the City. Alaska has no income tax, and sales tax is left to the cities discretion. Anchorage has not adopted sales taxes and their city services reflect that in spades. It makes my wife and I glad to pay a reasonable level of taxes now that we are back in the L48 because we have really come to appreciate the convenience of recycling, garbage removal, plowing, street sweeping, etc.

Random fees are another story. Oregon is contemplating a fee for bicycles because they "use the streets and don't pay for them". That's bullshit. I pay for the streets any number of ways (property tax, sales tax, gasoline tax, etc.