Artists are the answer? 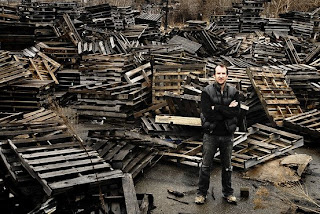 Cleveland is working hard to attract artists to neighborhoods hit hardest by foreclosures and dis-investment. While this is a good tactic to pursue, I find that it is short sighted and will end up gentrifying instead of stabilizing communities. We need artists, blue collar, white collar, and other residents to move into neighborhoods to stabilize them. As history has shown, when you attract the artists they will eventually get priced out and gentrification takes place. This Wall Street Journal article discusses these issues.

Last month, artists Michael Di Liberto and Sunia Boneham moved into a two-story, three-bedroom house in Cleveland's Collinwood neighborhood, where about 220 homes out of 5,000 sit vacant and boarded up. They lined their walls with Ms. Boneham's large, neon-hued canvases, turned a spare bedroom into a graphic-design studio and made the attic a rehearsal space for their band, Arte Povera.
This September, Cleveland's Community Partnership for Arts and Culture will host its second conference, titled "From Rust Belt to Artist Belt," with artists, city leaders, local banks and real-estate agents to discuss ways to transform Cleveland into a regional arts hub. Tom Schorgl, the group's president, said it's creating a Web site for artists that will include a searchable database of cheap properties. His group is also helping artists find vacant properties through the newly created county land bank -- a bank of distressed properties the county will manage until they can be redeveloped.
The strategy is controversial. Some urban planners warn against treating the arts as a cure-all for urban development, particularly since low-income residents are often forced out when artists move in. "Artists have had the effect of gentrifying neighborhoods that were working for the existing communities," says Dana Cuff, an architecture professor at UCLA and founder of cityLAB, an urban-design think tank.

Cities need to attract a diverse mix of people to these neighborhoods in regards to class, income, profession, and race/ethnicity. I think this approach will be a vibrant mix neighborhood that hopefully won't end up down the same path again.
Posted by mides@hunter.cuny.edu at 6:00 AM

Great post as for me. It would be great to read something more concerning that theme.
By the way look at the design I've made myself A level escort