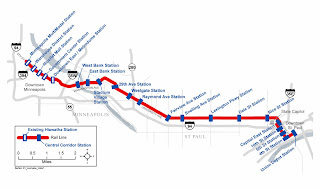 By Sheila Regan , TC Daily Planet
April 23, 2009
Seattle community organizer Thao Tran stirred up controversy last week as he spoke at various forums and events, proposing the idea that businesses along the proposed Central Corridor line seek direct funding to cover their loss of revenue during construction. Tran is the former executive director for the Vietnamese American Economic Development Association and chaired the effort among community and political leaders in Seattle to create a $50 million mitigation fund, which included $12 million in business interruption grants to 166 businesses during construction of the Seattle light rail and re-establishment payments for 30 businesses that had to move.

Tran described the moment when he decided that instead of working to stop the Seattle rail from happening, he would focus on figuring out the best way to protect his community during its construction. He was fly fishing with his mentor, a dean at the University of Washington, and the dean said: “This project is going to come into your community like a giant snowball, you can’t resist it. The best thing you can do is try to deflect the impact.” Tran said the best way to deflect the impact is to provide direct assistance to businesses to cope with the loss of revenue during construction.