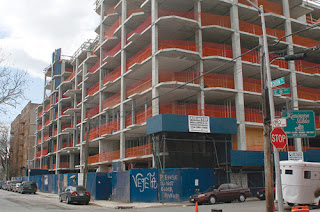 It seems like a logical partnership with private and public. Developers are stuck with way too much inventory that is not going to move in the next 5 years. Cities needs more units for affordable housing, especially in high cost cities were prices for real estate are still beyond most people's reach. The solution is to bring the two together, fill empty market rate units with families that need affordable places to live. What a better place to do it than NYC. Here are some excerpts from a good article.

Quinn’s proposal focuses primarily on using an aquisition fund to purchase luxury units and convert them into moderate- and middle-income housing. Jeffries is considering using subsidies to lower rents, or creating a new state tax incentive program similar to the 421-a program, which requires developers receiving tax breaks to build affordable units in select neighborhoods.

“Who takes the haircut is a complicated situation here,” said Brad Lander of the Pratt Center for Community Development, which is working on recovering the Kensington project for affordable use by possibly buying it through the foreclosure process. Jeffries is working with Rep. Edolphus Towns (D-Brooklyn), who chairs the House Oversight Committee, to get banks receiving federal bailout money to help refinance landlords’ mortgages. If they can lean on banks to help restructure those deals, they say, landlords could then afford to offer their luxury units at lower rates.

While this model will have developers taking a good amount of lost on their projects, what would be the alternative? They are going to lose out one way or another, so it is good that the city and state are looking to push and make units affordable out of the housing bubble and foreclosure crisis.
Posted by mides@hunter.cuny.edu at 6:00 AM