Will New York City ever be the same? 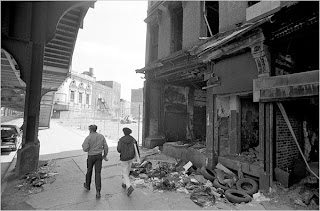 The NY Times talks with 5 economists about the economic future of NYC. While they don't agree on much, what is clear is that NYC will not be the city it once was. Even in the dark days of the 1970's, today is a national recession and a city and state that are completely broke. Having left the city recently for a job in the Twin Cities I am curious if NYC will ever make it back to the days before and after 9/11.

Here is what the experts think:

There are other reasons to worry, he said. For instance, while many see the financial crisis of the 1970s as among New York’s bleakest days, he believes this current crisis could be more painful. Back then, the state’s fiscal health was solid, and the state was ultimately able to help the city. But this time, “if anything, the state is definitely in much worse shape,” because of its own deficit of approximately $14 billion, and the prospect of mounting costs in the future for pension, health care and debt service expenses.

Personal income taxes in the city are expected to decrease 35 percent between 2007 and 2009: a drop unprecedented in recent memory. The number of tourists fell for the last two quarters, by roughly 5 percent, compared with the previous year. And, anecdotally, she has noticed deep discounts at retailers all over the city, well beyond the traditional post-holiday discount season, as well as unusual real estate deals in which landlords are offering prospective tenants free rent for a month or other enticements.

“I’m very reluctant to trust my gut on this, because after 2001 everyone thought we were in a long-term bad time, but it was almost miraculous the way the city economy bounced back from that,” he said.

Bear in mind, she says, that from 2003 to 2007, the securities industry accounted for 59 percent of the growth in wages and salaries in the city, according to the Quarterly Census of Employment and Wages from the Bureau of Labor Statistics, even though it makes up only 6 percent of all private-sector employment. So the questions that will help determine the future, she said, include: How successful have the bankers and traders who lost their jobs been in finding new work? And if they remain out of work for a long period, how long will their severance checks continue to pump money into the economy?

“New York City isn’t like Elkhart, Ind.,” Ms. O’Cleireacain said, referring to a city that President Obama visited last week, one that largely depends on a single industry, recreational-vehicle manufacturing, and where unemployment has soared to 15 percent. New York, she said, “is a magnet for talent: for smart, enterprising, ambitious, innovative people, not only from this country but from around the world. Everyone wants to be here, and I think that sets us apart from virtually any other city.”