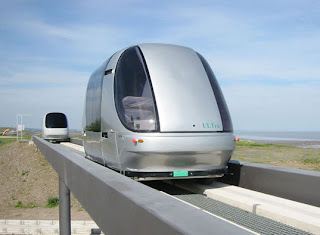 In this recent article Michael Andregg is spot on: we need to get people thinking about PRT. The problem as I see it is that he is a victim of his own hyperbole. Do we really need PRT? Of course we do. If we think for just a moment, we already have PRT: the bicycle.

The old technology was light rail and the new technology Personal Rapid Transit, or PRT. Engineers at the U showed that PRT could do a superior job for about a third of the cost in energy and money compared to buses and trains, including "light" trains. It could do this because it involves very light electric vehicles carrying only one to three passengers on nonstop, one-way trips above existing transportation grids on 3-foot diameter guideways. They showed that PRT could operate 24 hours a day over entire areas rather than be confined to schedules on high-density corridors because it requires no drivers and that it could be built without tearing up neighborhoods or businesses for years. Per mile, it would cost about one-tenth as much to build as light rail.

I can think of an even better way to save money while improving transportation. Why not take the existing infrastructure that we currently have and redesign them for proper bicycle use. I am sure this would be at 1/3 the cost of proposed PRT, if not even less. As many cities around the world have proven it might cost nothing at all other than the salary of a few pedestrian and bike planners. I almost forgot, we'll need some white paint.
By rethinking how are roads are used and simply by retiming lights, creating bike right-of-ways, and changing some legislation and laws, we could have PRT in the matter of a few years. I guess my flawed theory is that my PRT is based on an old mode of transportation that has been working for more than 100 years. Maybe it is time that we caught up to the modern day of the two wheeled human powered vehicle.
Posted by mides@hunter.cuny.edu at 6:00 AM

Snow, rain, high winds, scorching heat -- are you really proposing that people bike for miles through such conditions, and that this is equivalent to (better than) PRT?

Where I live, we have a vibrant, even militant bicycle culture. It has been raining for a few days, and I see the diehards out there, pedaling along in the pelting rain with ponchos on over their cycling slicks and helmets. I drive around them, giving them plenty of room, of course, dry and warm in my car. I arrive at my destination in minutes, ready to tackle whatever my business or purpose might be. Not wet or muddy, not sweaty, not huffing and puffing from pedaling up a steep grade. Different strokes for different folks.

I don't begrudge anyone a preference for bikes, and more power to those who advocate for more bicycle friendly facilities. BUT, please be realistic. Even if everyone were healthy and young, bicycling does NOT provide the same or better benefits than PRT, especially in the extreme conditions I mentioned above and other situations. Often, cycling will be an appropriate transportation choice. But what to do on the MANY occasions when it is not? Take a bus? Use a car? Stay home?

Cyclists should be friends with PRT advocates. If the latter are right, and PRT proves to be attractive enough as a mode of transportation to inspire many people, on many occasions, to leave their cars parked and take PRT to wherever they are going, that will leave the streets less crowded and much safer for pedestrians and cyclists alike. Admit that there are many circumstances in which, and many people for whom, cycling would not be an appropriate transportation choice and something like PRT would. Then help us provide this workable alternative to roadway motor vehicles -- an alternative that people would VOLUNTARILY choose, rather than being forced to use as is now the case for many unnecessarily expensive and underutilized public transit systems.

Seriously, how many cyclists do you know that can sustain 40 MPH over flat terrain while hauling a cart full of groceries (let alone their elderly grandmother who is in no condition to be cycling)? Bikes are great, but they are not a panacea. Just like PRT isn't a panacea--we still need high-speed rail or something similar for longer trips.

Additionally, since in places where it is built PRT will be more attractive to many people than driving (no need to buy and maintain your own vehicle, find or pay for parking, pay for insurance and gasoline, be old enough to drive, have good eyesight, be sober, etc.), having PRT available will take many cars off the road, thus freeing up much more roadspace for cyclists, pedestrians, and--most importantly--emergency vehicles. Fewer cars means more safety for cyclists, which means more people will be willing to get out of their cars and get on their bikes.

Note that the PRT that will open in Heathrow Airport this year, pictured above, is not really the optimal design for PRT. The vehicle is still a lot bulkier than it needs to be, partly through bad engineering design and partly because it has to contain its own power supply and engine, and it uses conventional tire-on-pavement with sensor-guided steering to stay on the guideway, and hence has much lower achievable speed (25 MPH max--something you could in fact outpace on your bike, though perhaps not while carrying luggage uphill to your airport terminal). The ITNS design, on the other hand, uses line electricity and linear induction motors and hence saves a lot on vehicle size and weight. It also has low-rolling-resistance tires housed inside a metal guideway, which means there's virtually no chance of derailment and hence safe operation is possible at higher speeds, at least as high as 40 MPH and perhaps higher. The guideway is also smaller and less intrusive.