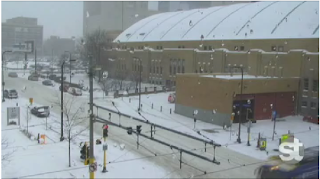 The snow storm this past Thursday in the Twin Cities reminded me how fast cities get crippled by a storm. They get crippled because our modes of transit consist of private vehicles and buses. While I rode into work that day, I have skinny tires, I was not ready to make the trek home by bike.
Instead I decided to bus it home. Well that was a costly mistake. My commute home (from St. Paul to South Minneapolis) took over two hours. The express bus was not stopping at Rice and University. The 16, yes Mr. pokie, seemed to be the only bus running that was actually in service.
After I realized a 94 or 50 was never coming I got on a pretty jammed pack 16 (everybody else had figured the game out as well). University Avenue was a parking lot. We passed three stalled cars, still in the traffic lanes, and two stuck buses. While I don't ride the bus very often, it was a day like this that I am glad the Central Corridor is coming. My commute would have been about an hour long, what is usually is by bus, rather than 2 and half hours long.
The Twin Cities are no strangers to cold temps and hefty snow falls, so it is troubling that this storm so quickly, at least for me, crippled the public transit that gets people around. This service was so slow, next time I'll take my chances on biking instead.
I am looking forward to the central corridor and having more options when it comes to transit modes.
Posted by mides@hunter.cuny.edu at 6:00 AM

just make sure you get heated switches!

Bummer. I agree - more trains are what's in order around here. In the meantime, you should have called - I would have ventured into the eye of the storm to rescue you.