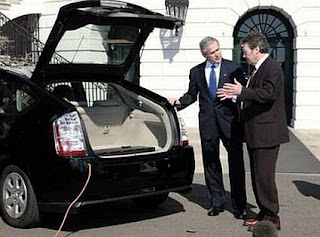 Tim Beatley has this great article in the most recent Planning magazine. He asks the tough question: are greener cars any better than what we have now? Does this change the fundamental patterns of travel? Below is the article.

Ever Green
By Timothy Beatley

As I write, Congress is working out the details of the promised bailout of Detroit car makers. So it is a good time to consider the prospects of a world with ever more cars, and whether it makes sense to subsidize them further.

For many observers, the answer is yes — so long as the cars are "green." There has never been so much retooling and redesigning, with so much fanfare. Although the prospects of a fully functional hydrogen car have dimmed, there is great interest in hybrids like the Chevy Volt, which uses an electric engine to turn its wheels and a gasoline engine to recharge its batteries.

Some of the more interesting all-electric models are coming from small companies like the California firm Zap; Canada's Zenn Motors; and Porteon Electric Vehicles in Portland, Oregon. Zap manufactures a three-wheel, four-door sedan that sells for a bit over $10,000 and has a top speed of 40 mph. It would be great if these smaller, very efficient electric vehicles drastically changed our driving habits so that we would view the private auto as supplemental to a mostly pedestrian and transit lifestyle.

I'm not at all convinced that this is what will happen, however. The small electric vehicles actually encourage neighborhood car trips. And the message of the larger hybrids like the Volt or Toyota's Highlander Hybrid seems to be "don't worry, keep driving."

To be sure, many of the new green cars are promising. The sporty Mitsubishi i MIEV can travel about 100 miles on a full charge, and the Eclectic, the electric car made by the French company Venturi, produces much of the power needed to charge its batteries from rooftop photovoltaic panels and wind turbines.

Other new concepts might help to reduce the overall ecological footprint of cars. How about interiors made of biodegradable materials? (Think compostable car seats.) Architect William McDonough worked many years ago with Ford on a prototype of a recyclable car, called the Model U. Another promising concept is to bundle an electric car with home ownership. We can imagine every new house equipped with solar panels sufficient both to power the home and to recharge the car.

Still, the limitations of green cars are considerable. Long charging times and short mileage range make them unappealing to American buyers. In addition, if the energy source for the batteries is a coal-burning power plant, electric cars don't help us much — although they could certainly reduce our dependence on foreign oil.

Making driving more efficient is no guarantee of green progress. We know from the past that energy improvements often result in more consumption rather than less, and focusing on making cars more efficient can lead us to ignore the other problems inherent in a car-based culture: the loss of community, encouragement of a sedentary lifestyle, and the general disconnect from the places where we live.

Meanwhile, we set a bad example for the rest of the world, which continues to emulate our car-based culture. Recently, for example, the Indian car maker Tata Motors unveiled the Nano, a tiny car that sells for a mere 100,000 rupees, or about $2,500, and has already acquired the nickname "the people's car." The Nano would not meet basic safety requirements in most developed countries and it's likely to add significantly to air pollution. But in India it is viewed as a great leap forward.

The prospect of major increases in the auto-traveling population in the heavily populated developing world coming just as our planet faces the double challenges of peak oil and climate change seems insane. Yet, to say this as an American smacks of an "I have mine, you shouldn't have yours" point of view.

What we should be saying to the world is that the private automobile, electric or combustion, is a technology of the past. Responsible, resilient cities must adopt profoundly different models of urban development that are far better suited to the global challenges we face.

European cities have terrific examples of emerging models of car-free or car-limited developments or neighborhoods. Vauban, a former army barracks in Freiburg, Germany, has emerged as a poster child for car-limited living environments in cities. Its design limits car access and provides green courtyards where children and adults gather in safety. The city has extended its tram network to serve the community, and residents have access to nearby car-share vehicles. Resident parking is in peripheral lots (with a hefty charge for spaces).

While the new technologies of green cars clearly are positive in the short term, my fear is that they will solidify the idea of the car as the dominant form of mobility throughout the world. At a time when the basic concept of a private automobile is becoming untenable, we are finding new ways to assuage our guilt about driving them. It would be far better, I think, to view electric vehicles as an interim step on the way to even more creative and greener forms of public transit, and a recommitment to planning walkable, bikeable communities.

Timothy Beatley is the Teresa Heinz Professor of Sustainable Communities in the Department of Urban and Environmental Planning at the University of Virginia. His most recent book is The Ecology of Place. Ever Green will appear every other month in Planning.

Beatley makes the case for disinvestment in the auto industry and instead takes a look at how the private automobile can supplement other modes of travel. A radical idea, maybe to some, but an idea that is worth further investigation and investment.
Posted by mides@hunter.cuny.edu at 6:00 AM