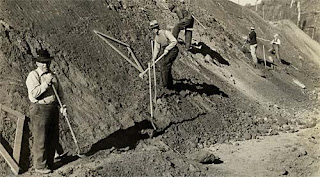 Ben Adler has written an excellent piece for the nation that really lays out the point why Transit should be the focus of the stimulus package and new administration. While I have my concerns between the rhetoric and reality our new president promised, Mr. Adler gives us some concrete ideas. Here are a few excerpts from the article:

It is a self-fulfilling prophecy: if you build highways, inefficient suburban sprawl will develop and, ultimately, so will traffic and the demand for yet more highways. Build mass transit and you see high-density, efficient housing construction and people living without cars. As the high demand for housing in walkable urban environments like Manhattan and San Francisco demonstrates (and as public opinion polls confirm), plenty of Americans want to live in dense urban communities, and their numbers will only grow as the country's demographics shift toward more childless households--less likely than families with children to want detached suburban houses.

Public opinion has been shifting toward mass transit, especially with such volatile gas prices. Transit ridership climbed throughout 2008, even though gas prices dropped in the second half of the year. "The public support for greater funds for transit is very clear in the last few elections," declares Parris Glendening, former governor of Maryland, now president of the Smart Growth Leadership Institute. Initiatives to pay for mass-transit investments have been winning victories across the country, from Seattle to Charlotte. California passed a $10 billion high-speed-rail ballot initiative last year.

Investing in mass transit would benefit not just the environment but also poor people, many of whom can't afford cars, don't drive and so have been shut out of the new economy, with its service sector employment increasingly available only in suburban office parks. A study by the University of Wisconsin found that 74 percent of African-Americans and 66 percent of Hispanics ages 18 to 24 in Milwaukee County did not have a valid driver's license. As urban theorists like Joel Rogers have noted in their "Emerald Cities" proposal, building mass transit could also strengthen labor, providing a larger base of unionized construction and maintenance jobs.

The greenest way to lift the country out of a deepening recession would be to put people to work building mass-transit infrastructure, which could, in turn, ease the flow of goods and services, help generate economic growth and open economic opportunities to the disadvantaged. With a new president from Chicago and a House Speaker from San Francisco, the time seems ripe for Democrats to take advantage of the dual opportunities this year presents to alter America's transportation infrastructure radically: the upcoming stimulus spending bill and the Surface Transportation Reauthorization, due for renewal by September.

Simple ideas but they will be effective.
Posted by mides@hunter.cuny.edu at 6:00 AM