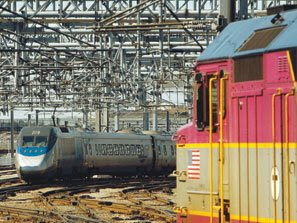 It’s a sum that far surpasses anything before attempted in the United States — and more is coming. Administration officials told Politico that when Obama outlines his 2010 budget next week, it will ask for $1 billion more for high speed rail in each of the next five years. Yet for all the high stakes, the pieces didn’t fall into place until the end of deliberations on the recovery bill. And the way in which they did is revealing of the often late-breaking decisions — and politics — that shaped the final package. As a candidate for, Obama spoke of high-speed as part of his vision of “rebuilding America. Campaigning in Indiana, he talked of revitalizing the Midwest by connecting cities with faster rail service to relieve congestion and improve energy conservation.

High Speed rail would change the travel patterns of the Midwest forever if high speed rail was fast and clean. Hopefully this will make up for some of the less than desirable appointments our president has made with housing and urban issues.
Posted by mides@hunter.cuny.edu at 6:00 AM

How about making sure these high speed trains have a facility to accommodate bikes?

Miguel, you are completely right. I use to love the chinatown bus on the East coast because I could take the bus to numerous cities and then hop on my bike.