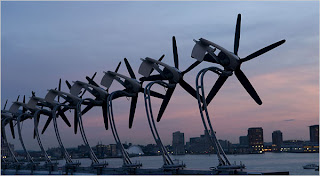 The New York Times has this article discussing just how useful wind turbines would be in urban areas.

But many experts caution that rooftops, while abundant, are usually poor places to harness the breeze. Not only are cities less windy than the countryside, but the air is choppier because of trees and the variation in heights in buildings. Turbulence can wear down a turbine and make it operate less efficiently. This is particularly problematic for houses with pitched roofs.

“In an urban environment, more times than not you’re better off with a solar panel,” said Mr. Stimmel, of the wind industry association.

A recent British study of wind on home roofs found that turbines generate less power than installers projected because of lower-than-expected wind speeds. Ian Woofenden, a senior editor at Home Power magazine who teaches wind workshops, estimates that electricity from rooftop turbines may cost $1.50 a kilowatt hour or more. (That is enough electricity to run a hair dryer for an hour, roughly.)

While this is a great alternative energy resource, will it be cost effective, much like solar panels, to cover our urban roofs with wind turbines? It seems the idea is better than the actual current technology. Maybe these rooftops can be better used for solar, green space, and rain water catchment.
Posted by mides@hunter.cuny.edu at 6:00 AM