Getting to the airport 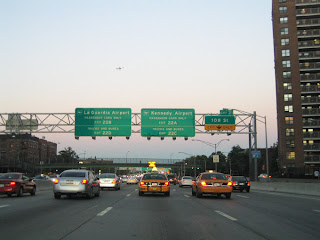 This is a funny, but interesting, blog post at Planetizen from Josh Stephens regarding ground transportation to our nations airports. I have found that Portland and Minneapolis/St. Paul are the two best with a one seat ride that takes about 20-30 minutes to get you from the airport to downtown. Here are some from the blog post:

Most Conspiratorial: Las Vegas McCarren. Between the expanse of the desert and the enormousness of the Strip's buildings, it would seem that walking from McCarren to the poolside bar at Mandalay Bay would be a short stroll. As close as McCarren is, I found out the hard way that it's not walking close, not when it's 105 in the shade, and certainly not without sidewalks. It is, however, public transit close. Not surprisingly, McCarren ranks second in the nation for origins and destinations, and you can bet that almost all passengers are heading to the Strip (where else is there to go?). If they could get there via a spiffy express public bus line for a reasonable fare, it would probably be the most popular, and straightfoward airport bus line in the United States. Except that it doesn't exist. Instead, your cheapest choice is a slow shared van that stops everywhere between ancient Egypt and modern-day South Beach. Or you can always just flag down a Hummer limo and pop some Cristal en route.

Most Disappointing: New York Kennedy. The greatest irony of JFK's vaunted new AirTrain is that there are still luxury coaches stacked up outside Grand Central offering rides to the airport for $12 each way. AirTrain is that expensive and that arduous. It requires a long subway ride and if you transfer at Jamaica Station you're in for a haul of a transfer. AirTrain itself is fine, but for $5 on top of whatever the subway or LIRR cost, it really should be faster and easier, and if it worked properly it would put those buses out of business.

Best Overall (Business Class): San Francisco International. The Bay Area's vaunted BART system rolls right into the International Terminal at SFO with a clean, attractive new station. It's not a lame spur but rather a real BART line (passing through downtown San Francisco en route to Oakland and Contra Costa County and connecting with other BART lines and CalTrain) and is priced accordingly (i.e. it's expensive -- over $5 for the half-hour ride to downtown). The best thing about the SFO connection is also the best thing about BART: in the Bay Area commuters of all stripes ride BART, and, therefore, so does of a diverse array of airline passengers.

Best Overall (Coach): Minneapolis-St. Paul. The Hiawatha light rail line runs directly into both terminals at MSP and reaches downtown Minneapolis in less than a half hour, all for the standard $2 fare. Unfortunately, the system includes only the one line, but it's a remarkably efficient line, hitting many major destinations. (If Chicago ever resolves its maintenance backlog, O'Hare would take this category in a landslide.)