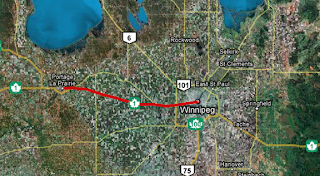 We have heard all the reports about people driving 2-3 hours one-way just to get to work. For those of us that use two wheels and push the pedals we have little to complain about. Mike Caslor is an extreme commuter but he does it by bike. Here is an excerpt from the story:

Mike Caslor decided to start riding his bicycle to his downtown office once a week last year as a way to get in shape for mountain-bike racing. The 31-year-old father of two says his schedule was too busy for training time, so the 90-kilometre (56 miles) commute between Portage la Prairie and Winnipeg was a convenient way to get his exercise in. The ride takes Caslor, a social worker, about 2.5 hours in each direction — as much as three hours when there's a strong Prairie headwind, he said.

On the highway, Caslor said, he can use the shoulder as a kind of dedicated bike lane. But in Winnipeg, there are no dedicated bicycle lanes on major routes — something Caslor believes the city should introduce. City officials say that could be tricky. "Basically, we didn't really build the city for bikes the first time," said Coun. Jenny Gerbasi. "If you don't build it right the first time, to go back and fix it is difficult. But, you know, I think that's the direction we need to go."

I think Winnipeg can change the current infrasctructure and make more room for Mike, don't you?
Posted by mides@hunter.cuny.edu at 6:00 AM