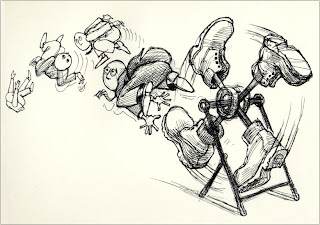 While I am a supporter that NYC should have term limits (I'll explain later) this article is discussing the pros and the cons.

Officials in New York City, however, are contemplating the unusual method of changing term limits through the City Council, rather than through popular vote. That may be easier to push through, given that voters would be likely to resist such a change, having supported term limits in 1993 and 1996. But it is also far more controversial.

“I like Bloomberg, but he looks like a politician if he does it, as opposed to a guy who came in to reform New York City,” Howard Rich, chairman of U.S. Term Limits, said of New York City’s mayor, Michael R. Bloomberg. “To bypass the will of the people without their permission strikes me as profoundly selfish and undemocratic.”

There is precedent for what New York is considering. In 2001, the D.C. Council in Washington overturned a term limits law that had been approved by voters seven years earlier. Despite working around voters, council members experienced no serious repercussions, said Councilman Jack Evans, who led the effort. He pointed to his own re-election two years later. “Nobody ever raised it — and I was the guy who proposed it,” he said.

Here is why term limits should have no effect on urban planning:

1. The planning department should be doing the planning (not real estate developers, elected officials, or NIMBY residents).

2. All serious changes in regards to planning should be approved by the city council and planning commission making them law and outliving any two term elected official.

3. Clear goals, indicators, and benchmarks should be established in a larger master or comprehensive plan that the city uses and refers to for future planning.

4. Most elected officials projects are knee jerk reactions (and in NYC) have hurt our urban fabric more than have enhanced it.

The argument for NYC elected officials is a bit ridiculous since most are already looking at their next gig (elected office they can run for) before term limits are out. We need to overhaul the entire system before we extend term limits or eliminate them entirely. NYC can benefit from some fresh faces since a majority of state and federal seats are held by the same individual for years (no term limits). At least at the local (city level) we can hold our elected officials accountable since they know we can throw them out.

If the planning process is done right who your elected officials is and the number of terms they can serve should be minimal. Image is from Anthony Gonzalez
Posted by mides@hunter.cuny.edu at 6:00 AM