Caught in the Mosh 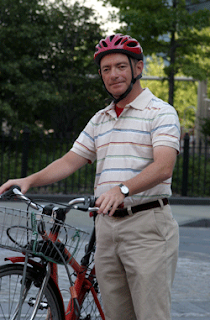 This is a great article in City Limits about a long time bike commuter who happened to get caught in Critical Mass. Stuart Post gives us a detailed description of how he experienced Critical Mass last month with the "anarchists" and the NYPD.

I was pleasantly surprised by everyone’s exemplary behavior: the cyclists stopped at every red light as about a half-dozen escort police officers on scooters rode patiently alongside or behind them to keep motorists at bay. I even noted friendly banter between a heavyset officer and a dreadlocked bike messenger-type. The ride was leisurely and meandering – down Seventh Avenue, east to Fifth, back over to Broadway and through Times Square. As we traveled through these heavily touristed areas, it was great to see the out-of-towners’ delighted reactions to our rolling crew: laughter, cheering, thumbs-up signs, digital cameras flashing away, smiles all around. What a great story for them to tell. Perhaps their snapshots of the impromptu bike parade will even encourage the folks back home to come to the Big Apple – with pocketfuls of Euros! – to experience such playful shenanigans for themselves.

Yet something odd happened just south of 14th Street. The scooter cops riding “sweep” started tooting their horns and slowly made their way into our phalanx of bikers. While we were all stopped for a red light by St. Vincent’s Hospital, a displeased-looking police commander strode into the crosswalk and announced, “Okay, let’s ticket some of them.” The scooter cops surrounded the six closest riders and got out their pads. Shocked by this sudden flexing of law enforcement muscle, I got on the sidewalk to watch as most of the bikers pedaled off with the changing light, to complete the ride. Although I was joined by several other observers, none seemed particularly upset or surprised. Random ticketing is apparently NYPD standard practice at Critical Mass rides.

I'd had enough. I hopped back on my bike and headed home with a sick feeling in my stomach. Yes, my lovely and wholly unexpected group ride was now history. But I was far more bummed about the future of the city I so love. How could such small-minded bureaucratic pettiness be tolerated by the Bloomberg administration? And how did this behavior jibe with the mayor’s fierce advocacy of congestion pricing, sponsorship of Summer Streets, and creation of miles of new bike lanes? I had a sinking feeling that this jarringly mixed message – pat cyclists on the head with one hand and smack them in the face with the other – might seriously undermine Mayor Bloomberg’s vision of a green urban utopia.

I have yet to ride Critical Mass in NYC as I am worried about the ticketing issue and the conduct of the NYPD. Once again, NYC rears its ugly head at bike commuters and illustrates that we don't belong on the streets.
Posted by mides@hunter.cuny.edu at 10:10 AM