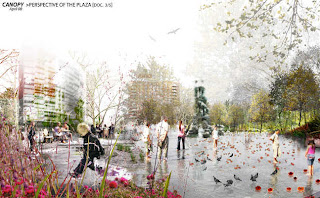 The design competition is done and all 30 designs are on display in Grand Army Plaza. Many of the designs neglect to actually deal with the current traffic issues and connecting the plaza to prospect park. It seems that many are not so happy with the plans that made the cut. Here is a comment that pretty much sums it up over at city room:

The ‘plaza’ area of Grand Army Plaza is a majestic, glorious public space designed by the inimitable team of Olmstead and Vaux, and is in absolutely no need of any ‘imagining’ or re-design — particularly not if the re-design is chosen via competition, which has proven in recent years to be a very poor and problematic method of soliciting the best designs for public projects (example: WTC memorial, Queens Museum of Art, etc..).

I would like to propose that the “problem” at Grand Army Plaza is not a landscape architectural problem, rather, a traffic engineering problem, and that the periphery of the plaza alone could use a redesign - not the interior, which, thank you very much, we in Brooklyn like just as it is.

Perhaps if the Design Trust truly had any stake in what’s most appropriate for Brooklyn, or had any sense of reverence for the democratic vision of Olmstead and Vaux, this would be apparent. As it is, this effort smacks of the same lethal combination of mediocre talent, opportunism, political access, and deep pockets that made possible Atlantic Yards, Frank Gehry’s outsized, outdated superblock-style monstrosity that no doubt has Jane Jacobs tossing in her grave… oh, Bruce Ratner is a supporter of this endeavor.

We in Brooklyn need to ask, who are the people behind these efforts to “reimagine” parts of our community? Particularly if a cursory look at the cast of characters includes sleazy Manhattan developers, a nonprofit with dubious qualifications, and — I mean, take a look at the exhibit itself. It’s a Manhattan graphic and display design sensibility, “giant cubes” just slapped down in the middle of Brooklyn.

As a New York Times editorial noted in 1963, after the demolition of Old Penn Station in Manhattan, “a civilization gets what it wants, is willing to pay for, and ultimately deserves” and “we will probably be judged not by the monuments we build but by those we have destroyed.” The misinformation in recent articles regarding GAP and its functionality is starting to sound suspiciously like some of the rhetoric employed during the architecturally disastrous urban renewal period… a period very harmful to the architectural consciousness of the city.
Where are the design professionals - architects, landscape architects, etc., - of Brooklyn on this matter? Has anyone else opened up The Death and Life of Great American Cities lately? (No comment on the architecturally vapid and environmentally stupid -glass curtain wall- Meier towers)…

Does anyone else have a problem with rich folks and dilletantes making decisions for Brooklyn?
— Posted by A Brooklyn Design Professional

That pretty much sums up the way I feel about the designs that made the final cut. While one does seem to create recreation for the residents. Check out all 30 and see what you think.
Posted by mides@hunter.cuny.edu at 6:00 AM