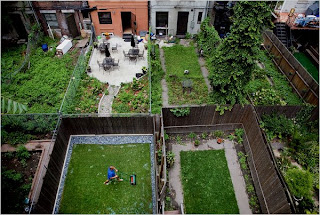 Here is a strange article in the New York Times about how New Yorkers create little havens in that plot of land behind their houses. While open space (which is private) is one of the golden gems in NYC (other than a rent stabilized apartment), this article and this report really are begging the question: Is NYC turning into suburbia?

From the NY Times article:

On West 120th Street in Harlem, Mark Pinn finds mowing his lawn to be less a chore than a respite from the grind of city life. "It's a little therapeutic," Mr. Pinn said. "I get out there and do my thing." Mr. Pinn and his wife, Katrina Parris, have a 16-by-18-foot plot of lovingly tended Kentucky bluegrass fringed with Mexican river rocks. At night, they sit outside and count their blessings: "A house, two kids, two cars and a lawn," Mr. Pinn says.

This recent study thinks so:

Today, leading transportation, planning and environmental groups will call on Mayor Bloomberg to change City policy that requires developers to build off-street parking with new residential buildings. This parking is required by City zoning rules, regardless of the building's proximity to transit or anticipated parking demand. The groups will release a study, Suburbanizing the City, which finds that City parking requirements will put 170,000 new cars on city streets by 2030. With little foresight, the City's zoning is transforming transit-centered neighborhoods into car-dependent ones and undermining city-wide traffic reduction goal 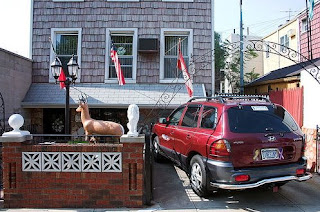 In a city where residents are clamoring for more green space, it is ironic that the zoning code dictates that more space still be used for cars. While this New York Times article shows these backyard green spaces, I am not so sure this is what most New Yorkers really want. Most people (in my opinion) seem happy to live in a concrete jungle and have access to larger parks as an oasis outside of the hustle and bustle of the streets. Do new homeowners with children want it all (a yard and a place to park their car)?
Posted by mides@hunter.cuny.edu at 6:00 AM