Hub and Spokes: Imageability of the Daily Bicycle Commute in New York City 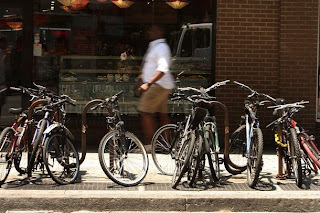 The research project is finally done. Hub and Spokes: Imageability of the Daily Bicycle Commute in New York City was an online survey and interviews with bike commuters about their mental mapping and images of how they perceive NYC as a bike commuter. Here is an excerpt:

In a city that is dominated by automobiles (1.6 million people enter Manhattan by car daily and of those 1.2 million of them drive alone), I wanted to find out how its residents who use other modes of transportation actually view the built environment. Although all forms of transit modes can be studied, I find this small minority (0.5%) who commute by bicycles the most marginalized by the existing infrastructure of New York City. The sole purpose of this study is to record the subjective perspective (mental mapping) that New York City bicycle commuters have of the build environment, good or bad.

While New York City has a vibrant and active bicycle commuter culture, there still exists a stigma attached to people who commute by bicycle. While a cultural shift is important to making bike commuting more acceptable in New York City and nationally, to achieve an equal and multi-modal approach to our street space New York City must prioritize the creation of a comprehensive bicycling network that supplements pedestrian, open/green space, and public transit improvements.

The entire report is here. Email if you are interested in a hard copy.
Posted by mides@hunter.cuny.edu at 9:26 AM