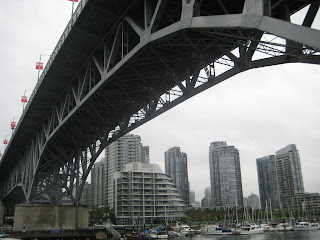 I was very excited to visit Vancouver. It had left a great impression when I last visited in 1999 and I was eager to see what is usually labeled one of the most livable cities in Canada. Our time in Vancouver was limited and although it was going to be a wet day, we made the best of it.

My first impression coming in on the bus lived up to all the things I heard about traffic congestion problems. I tend not to believe these stories since living in NYC traffic congestion has become a way of life, but it took us a good hour and a half to get downtown. What is always the worst part is you can see the skyline as it slowly sneaks up. 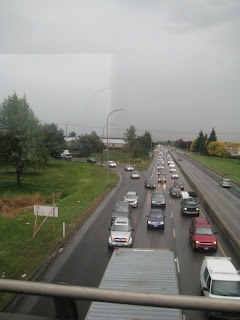 Because of the rain, we got the chance to take the bus and skytrain. I really liked how they had C - Commuter buses which were smaller and had routes that were off the electric lines (which is how the buses run, if you haven't been think San Francisco).

What seemed to me the biggest change from my last visit was the clear difference in the haves and the have nots. Much like NYC, it was clear that distinct classes of people lived in different areas. The lower lying land that was near the water tended to be luxury condos with garages for people's expensive cars. Having walked a good amount of downtown Vancouver, it became obvious that a real homeless and substance abuse problem existed. 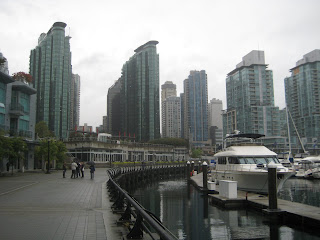 Unlike Seattle and Portland I found that pedestrian safety, despite lots of traffic calming, wasn't that great as drivers were more aggressive in Vancouver than the rest of the Pacific NW. I do like the funky feel that Vancouver has and the great way it actually uses the water around it to have ferry services.

Overall I did like Vancouver but it did not live up to the expectations I had for it. While I could blame the city, it was more about the livability and quality of life, and while it clearly was not bad, it seemed far off from all the recognition it gets.
Posted by mides@hunter.cuny.edu at 3:44 AM