Shared Streets hit the US 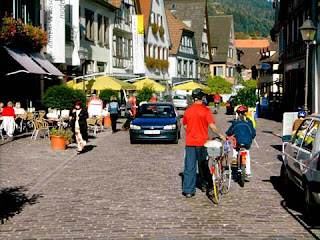 Shared streets have been a common feature in many parts of the world. In the United States we have been slow to come around to this concept where separation of uses is ignored. Instead the lines between sidewalk, street, car, pedestrian, and cyclist are removed. This article in New Urban News explains which cities are endorsing this design.

Up and down the West Coast and in parts of the East Coast, a select group of streets is going through a radical makeover. The street surfaces are being raised to the same level as the sidewalks. Curbs are being eliminated. Trees and vegetation are extending into what had been the domain of the automobile.

Motorists and pedestrians are being expected to use — imagine this! — their intelligence and their powers of observation to operate safely in multipurpose environments. A fundamental premise of modern traffic engineering — that safety can be assured only by strictly separating pedestrians from moving vehicles and by explicitly telling drivers what to do — is under challenge.

The new approach, called “shared space,” is showing up in Seattle, Portland (Oregon), San Francisco, Santa Monica, and other cities on the West Coast; in Cambridge, Massachusetts, New York City, and other places in the East; and in scattered places in between, such as New Town at St. Charles, Missouri, and the South Main development in Buena Vista, Colorado.

The father of today’s shared-space movement was the Dutch traffic engineer Hans Monderman, who succumbed to cancer last January at 62. Monderman devoted much of his career to removing traffic signs, signals, markings, bollards, and barriers from small communities in Holland; he accentuated the physical cues that cause motorists to proceed carefully through streets that serve purposes broader than vehicular movement.

Still a new concept here this is a design that calms traffic and works for all users. It is a great idea for commercial corridors where pedestrians dominate and fewer cars should be. This would be a great concept to try out on Prince Street in NYC.
Posted by mides@hunter.cuny.edu at 6:00 AM

As a motorist, bicyclist, and pedestrian, I am not so sure I like this idea.

Fist off, the cost involved to elevate tour roadways to match our pedestrian sidewalks would eba great burden on the taxpayer.

I would rather see certain streets closed to traffic on Sundays, to get bicyclists and pedestrians moving about more freely on a non-congested workday.