A sad day for NYC 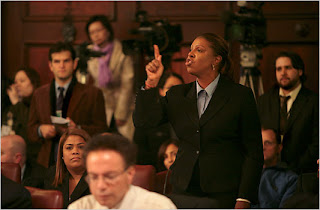 The NYC Council has decided that they should give themselves four more years (also the Mayor). While a few Council Members tried to get an amendment passed that would have stopped the vote on the extension of the term limits, when that failed, some decided to vote "Yes" on extending term limits. This NYC Times article gives you the blow by blow of yesterdays events.

After a spirited, emotional and at times raucous debate, the New York City Council voted, 29 to 22, on Thursday afternoon to extend term limits, allowing Mayor Michael R. Bloomberg to seek re-election next year and undoing the result of two voter referendums that had imposed a limit of two four-year terms.

The vote was a major victory for Mayor Bloomberg — a billionaire and lifelong Democrat who was elected mayor as a Republican in 2001, won re-election in 2005, became an independent last year, and decided just weeks ago that he wished to seek a third term for himself in 2009 — and for the Council’s speaker, Christine C. Quinn. But the intense acrimony surrounding the decision left a sharply divided Council and could ultimately damage the mayor’s popularity.

Councilman David Yassky of Brooklyn, one of three members who had introduced the amendment, announced that despite its defeat, he would vote for the underlying bill. He said that term limits were bad public policy and that a limit of 12 years, instead of 8, would help strengthen future lawmakers in the face of strong mayors.

Councilwoman Letitia James of Brooklyn adamantly disagreed. “The city of New York has never, ever in the history of our nation postponed a transfer of power, regardless of the circumstances,” she said, citing an editorial from The New York Times in 2001, when Mayor Rudolph W. Giuliani sought, without his success, to extend his term by three months in the aftermath of 9/11.

I still do not understand the logic that many members used to vote yes. If you are against term limits (and would like to change the policy) then why would you vote to give yourself one more. Why not vote NO and introduce legislation that would eliminate term limits for the next term. It is amazing how a bad economy and tough times can be spun so well that the Mayor can give himself four more years in office.

yeah but don't forget the great biking and mass transit programs that bloomberg and the DOT have done for the city, no to mention the STAR rebate program, that we homeowners get every year.

regardless of economy, Bloomberg did a good job and the people have a choice to vote for him again.