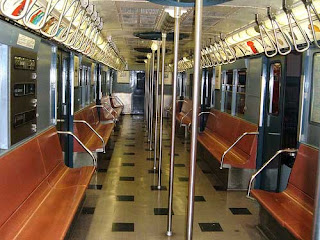 Having lived in NYC for many years I always wanted to check out the transit museum, but some how never got around to it. Since I'll be leaving NYC in November for a new job (look for a post about this soon) I decided it was one of the things I wanted to do before my departure. I have to admit that I didn't really think that it was going to be much of a museum, but it exceeded my expectations.

The museum is actually in a subway station (nice touch). The main floor has a good recap of the history of transit in NYC from trolleys, to bridges, buses, and of course, the subway. It did a great job of laying out the history and technology that made it all possible. It was really great to see how the subway tunnels and tracks actually got built over a hundred years ago. To my surprise they were playing Contested Streets in a screening room.

After about an hour on the main level you then descend to the subway platform. Here they have old subway cars parked on either side. Not sure what it is, but there is something really nice having the ability to actually walk through these cars and see what changes they made from model to model. They have large information boards down the middle that basically gives you the past, present, and future of the subway system.

I really thought the museum was well done. It actually gave me hope about the MTA NYCT, that if they are able to pull off a decent museum, maybe, just maybe, they will be able to keep the system up and running in a state of good repair.
Posted by mides@hunter.cuny.edu at 6:03 AM