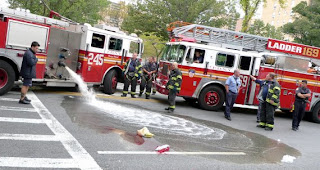 For all the improvements NYC has been experiencing under our current DOT commissioner Janette Sadik-Khan, this AM New York article illustrates that we still have a long road ahead of us. It profiles the new Tri-State Transportation Campaign's study.

Third Avenue and Broadway are the deadliest streets in the city, with 10 pedestrians killed on each roadway in the past three years, a new report says.In fact, New York City is home to five of the top 10 most dangerous streets in the tri-state area, according to the Tri-State Transportation Campaign’s report.

“The most dangerous roads are either extremely busy urban roads, such as Third Avenue in Manhattan, that handle many pedestrians and cars,” said Michelle Ernst, a staff analyst with the group. “Or … they are major suburban roadways dotted with retail destinations but designed exclusively for fast moving traffic.”

Third Avenue and Broadway tied for third place in the tri-state area with two Long Island roadways, Hempstead Turnpike in Nassau County and Sunrise Highway in Suffolk County, taking the top two spots. Overall, pedestrian deaths in the city are down with 136 fatalities last year compared to 187 in 2000.

Every three days a pedestrian is killed in NYC. Yes, that is a frightening statistic to swallow. Just recently Streets Blog had these posts Safe Streets for Seniors and Pedestrian killed on Ocean Parkway (pic above is from this post) . Also check out TA's crash statistics. I am still hopeful but a lot of work needs to be done.
Posted by mides@hunter.cuny.edu at 12:22 PM