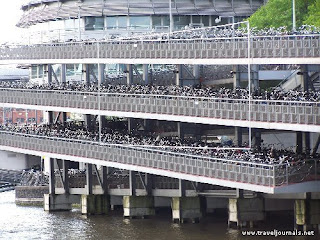 It has happened! Bike Europe is reporting that more trips in Amsterdam are taken by bike then cars.

AMSTERDAM, The Netherlands - The bicycle is the means of transport used most often in Amsterdam. Between 2005 and 2007 people in the city used their bikes on average 0.87 times a day, compared to 0.84 for their cars. This is the first time that bicycle use exceeds car use.

In 2006 the inhabitants of Amsterdam engaged in some 2 million trips a day, an 8% reduction compared to 1990. This is due to the number of trips per person per day falling from 3.6 to 3.1%. The number of transfers has fallen in the old city within the ring road in particular.

The number of trips by car, compared to 1990, has fallen in all districts (-14%), whereas the number of trips by bicycle has only risen within the ring road (+36%). The bike is used most often in the town centre (41% versus an average of 28%) and the car least often (10% versus an average of 28%). This can be attributed to the restrictive parking policies enacted here since the 1990s.

Which US city will be the first to achieve this?
Posted by mides@hunter.cuny.edu at 5:00 AM