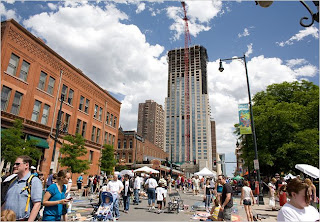 In the US Portland is the model most turn for public transportation. Unlike the rest of our fine cities, in the 1970's Portland redirected highway dollars towards mass transit, specifically light rail. In the late 90's/ early 2000 they got the street car running through downtown. Portland is a huge success and great model. This model has come full circle as many small and mid-sized cities are starting to take advantage of the advantages of LRT. Here are some excerpts from NY Times article:

The project in Carrollton is among many nationwide to be planned around new and existing light rail lines. These so-called transit-oriented developments, along with downtown revitalization plans, tap into a move toward more pedestrian-friendly, urban-style living. While the credit crisis has halted many housing developments — notably subdivisions and stand-alone condominium buildings — some projects that are going forward are linked to broader revitalization or transit-related efforts.


Urban-style development may be the brightest spot in a generally gloomy market. A recent survey of developers and investors by the Urban Land Institute for its annual Emerging Trends in Real Estate report found that urban redevelopment had the best prospects among all types of housing, while urban mixed-use properties and town centers scored high among niche property types. “These are the places that will be creating and holding value,” Ms. Poticha said. She said proximity to public transit could raise property values significantly.

Are we finally seeing the key connection between transit and housing. The drive to qualify model is no longer viable. Will TOD be forced development because in our current and future economics it makes the most logical sense?
Posted by mides@hunter.cuny.edu at 6:00 AM