77 mode of transit, but no gas car 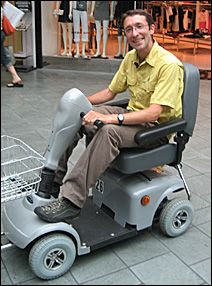 I am sure most of us have thought how would I travel around the country if I didn't need a car. Train or bike touring seem the two obvious answers. Boaz Frankel has been using any mode transit he can. This Minn Post article gives you the details:

Boaz Frankel is an adventurer. The 26-year-old Portland resident adventured his way to the Mall of America Wednesday, which may seem odd or at least not very adventurous, until you learn how he got to Bloomington.

The sharp-eyed among you will note that automobile does not show up on that list. And that's his shtick — 77 forms of transportation and counting, but no Ford, Chevy or Lotus Exige in the mix. He's also trying to avoid major highways."What does a car mean?" he said. "I decided four wheels or more and runs on gas — it's a car." He's been in electric cars and a vegetable-oil-powered ambulance.

With the right transit improvements Mr. Frankel should be stepping off one mode of transit onto another seamlessly w/ bike in tow.
Posted by mides@hunter.cuny.edu at 6:00 AM