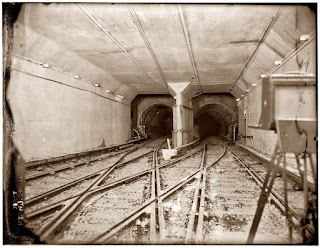 Remember the Big Dig? Boston dug a huge hole to sink an expressway to deck it over and create a park. A very expensive solution to accommodate automobiles. Well, New Jersey Transit is about to embark on part II.

New Jersey is going to build a tunnel to get its residents into Penn Station in Manhattan and it will only cost $8.7 billion. While new transit access is desperately needed for commuters into Manhattan, this project just seems a bit out of scope. Are there really no viable alternative solutions?

New Jersey officials have been planning the next train tunnel under the Hudson River for so long that it is already on its third name. This month, work is scheduled to begin on the Mass Transit Tunnel — formerly known as the Trans-Hudson Express and, before that, Access to the Region’s Core — more than 15 years after it was conceived.

The Hudson tunnel was designed to help ease the jam-packed rides that rail commuters from the west have long endured. New Jersey Transit, which runs as many as 23 trains an hour through a century-old tunnel into Pennsylvania Station in New York, has said that it is nearing maximum capacity. The riders of those trains share Penn Station with passengers of the Long Island Rail Road and Amtrak.

The project, however, does have environmental costs, and would “destroy between 19 to 25 acres of wetlands and open waters and approximately 112 acres of upland natural areas including 1.7 acres of forest,” according to a decision from the Federal Transit Administration.

Some mass transit advocates have insisted that the tunnel connect to either Penn Station or Grand Central Terminal, or both, to be useful to many of the commuters. Others have argued that the proposed station, 18 stories below ground, will be too difficult to evacuate in a fire or other emergency.

Is the tunnel going to be worth the costs?
Posted by mides@hunter.cuny.edu at 6:00 AM