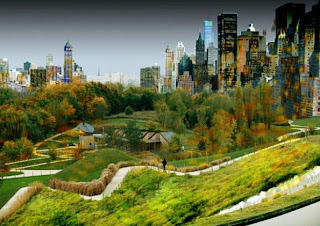 Check out this great slide show and article in the NY Times Magazine.

One of the first things Sarkozy did after he moved into the Elysée Palace was to convene a meeting of prominent architects and ask them to come up with a new blueprint for Paris. “Of course,” he said, “projects should be realistic, but for me true realism is the kind that consists in being very ambitious.” His job was to clean up the city’s working-class suburbs, and at the same time build a greener Paris, the first city to conform to the environmental goals laid out in the Kyoto treaty.

The results, a year later, may be the beginning of one of the boldest urban planning operations in French history. A formidable list of architects — including Richard Rogers, Jean Nouvel, Djamel Klouche and Roland Castro — put forward proposals that address a range of urban problems: from housing the poor to fixing outdated transportation systems to renewing the immigrant suburbs. Some have suggested practical solutions — new train stations and parks — while others have been more provocative, like Castro, who proposed moving the presidential palace to the
outskirts.