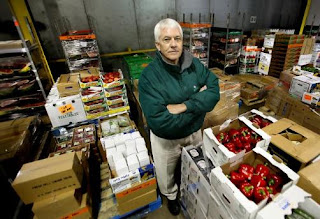 Urban Agriculture is going to be our future in most metropolitan areas. In St. Paul one man is trying to get a head start with stimulus money and local support:

For one thing, he's not a farmer. For another, winter isn't exactly peak growing season in Minnesota.Hannigan runs a produce distribution business on Rice Street and plans to build a hydroponic greenhouse on his property to grow fruits and veggies for local folks. An urban farm, he calls it, that would use alternative energy, employ St. Paul residents and provide tasty, homegrown produce.

"I can sell it -- I can't grow it," Hannigan said. "But I'll find somebody who can." He has been talking to a lot of people lately trying to make his urban farm idea a reality. The St. Paul City Council recently gave its support to the project, which is awaiting final approval from the federal government of $500,000 in stimulus plan money.

I really hope he gets some of the stimulus dollars. In my mind this is exactly what is was meant for and will help ignite the local economy and provide fresh produce for a neighborhood that has been the victim of disinvestment for years.
Posted by mides@hunter.cuny.edu at 6:00 AM